FOR IMMEDIATE RELEASE
The Outgoing Tide

Solana Beach, Calif. – Fiercely proud and battling the torments of an aging mind and uncertain future, one man devises a plan, but his family has other ideas in the West Coast premiere of THE OUTGOING TIDE, at North Coast Repertory Theatre. Deftly moving between present and past, playwright Bruce Graham weaves a highly relatable story sprinkled with surprising humor and powerful emotions. This touching family drama poses thought-provoking questions about personal choice and what it means to truly love someone.

*The actor or stage manager appears through the courtesy of Actors’ Equity Association.

BRUCE GRAHAM (Playwright) his plays include Burkie, Early One Evening At The Rainbow Bar & Grille, Moon Over The Brewery, Minor Demons, Belmont Avenue Social Club, The Champagne Charlie Stakes, Desperate Affection, Coyote On A Fence (Winner of The Rosenthal Prize, Two Drama Desk Nominations – the West End production starred Ben Cross), According To Goldman, Dex And Julie Sittin’ In A Tree And The Outgoing Tide (which starred John Mahoney and Rondi Reed). Graham recently returned to acting, playing Lenny in his play Any Given Monday, which won the 2010 Barrymore Award for Best New Play. His one man show, The Philly Fan, plays semi-continuously throughout the Philadelphia area. Something Intangible won seven 2009 Barrymore Awards including Best New Play. His film credits include “Dunston Checks In,” “Anastasia,” and “Steal This Movie.” T.V. MOVIES: “Hunt for the Unicorn Killer,” “The Christmas Secret,” “Ring of Endless Light” (Humanitas Award Winner – Best Children’s Screenplay), “Right on Track,” “Tiger Cruise,” “The Most Wonderful Time of the Year,” “Trading Christmas.” TELEVISION: “Roseanne,” “Leg Work” and various soap operas. Graham has received grants from the Pew Foundation, the Princess Grace Foundation (Statuette Award Winner) the Rockefeller Foundation and the Philadelphia Theatre Initiative. He is a two time winner of the Edgerton Foundation Award for Best New Play. Along with Michele Volansky he is the author of the book, “The Collaborative Playwright.” Graham is a graduate of Indiana University of Pennsylvania. He teaches film and theatre courses at Drexel University and lives in South Philly with his wife Stephanie, daughter Kendall and beagle Truman.

NIKE DOUKAS (Director) most recently directed All’s Well That Ends Well at A Noise Within, and an online production of the world premiere of Jake Broder’s UnRavelled.  Pre-pandemic projects include: the world premiere of Steven Leigh Morris’s Red Ink, at Playwright’s Arena in Los Angeles, King Lear at the Harold Clurman Laboratory Theatre, and Harold Pinter’s The Hothouse, at the Antaeus Company (nominated for 10 Ovation Awards and 4 Drama Critic Circle Awards).  As an actor, she has appeared at South Coast Repertory, The Geva Theatre, The Pasadena Playhouse, The Mark Taper Forum, The Old Globe, The American Conservatory Theatre, (MFA in Acting), The Berkeley Repertory Theatre, ACT (Seattle), The LA Shakespeare Festival, The Berkeley Shakespeare Festival, and Shakespeare Santa Cruz, among others.  Nike is also Head of Acting at the Art of Acting Studio, where she teaches and directs.  Her numerous guest star appearances on television, include a recurring role on “Desperate Housewives.”  She is a 2011 Lunt Fontanne Fellow, awarded to regional theatre actors for excellence.

ANDREW BARNICLE* (Gunner) has acted Off-Broadway and in regional theatres around the country, as well as in film and television.  Most recently he performed in Beauty and The Beast: A Christmas Rose, Twelve Angry Men and Fallen Angels at the Laguna Playhouse, as General Sickles in Faded Glory, Tomfoolery, Sherlock Holmes And The Adventures of the Great Nome Gold Rush, and Amadeus at North Coast Repertory Theatre. He was the artistic director for nineteen years at The Laguna Playhouse, and he was the associate artistic director at North Coast Rep in the 1980’s. He has produced more than 120 professional productions, directed more than 75, (including 13 at NCRT), and acted in over 30. He has been a proud member of Actors’ Equity since 1981.

LINDA GEHRINGER* (Peg) has made numerous.appearances at South Coast Repertory in many new plays and world premieres. She also went to New York for the premiere of Jenny Chow at the Atlantic Theatre Company with the company. She has acted in theatres across the country, most recently in the world premiere of the one-woman show, Lady in Denmark, at Chicago’s Goodman Theatre; the world premieres of Vicuña at Kirk Douglas Theatre; The Comparables at Seattle Repertory Theatre; Surf Report and Light Up the Sky at La Jolla Playhouse; The Women and Since Africa at The Old Globe; and The Crowd You’re In With (Jeff Award nomination) at Goodman Theatre. Her recent television credits include “Fear the Walking Dead,” “Grey’s Anatomy,” “Perry Mason” (HBO), “Physical “and recurring roles on “Touch” and “Justified.” Her other television work includes “NCIS,” “Raising Hope,” “Weeds,” “Gilmore Girls,” “Without a Trace,” “Cold Case,” “Ally McBeal,” “Frasier,” and “The West Wing,” and the films “Into the Storm,” “Kreep,” and “As Good As It Gets.”

LEO MARKS* (Jack) Most recently Leo played every resident of Bedford Falls in This Wonderful Life, a one-man It’s a Wonderful Life with Rogue Machine. Other credits include Mysterious Circumstances at the Geffen Playhouse, Everything That Never Happened and The Missing Pages of Lewis Carroll at Theatre at Boston Court, How to Write a New Book for the Bible at Berkeley Rep and Seattle Rep (with Linda Gehringer!), inaugural productions at the Kirk Douglas Theater and A.C.T.’s The Strand, Lincolnesque, and Time and the Conways at The Old Globe, The Language Archive, Smokefall, and Major Barbara at South Coast Rep, as well as productions at D.C.’s Shakespeare Theater, Cleveland Playhouse, Actors Theater of Louisville, Pasadena Playhouse, Ahmanson Theatre, The Intiman, PICT, Alley Theatre, and Playwrights Horizons. Founding member, New York’s Elevator Repair Service, and proud member of Antaeus. Awards include an Obie for Heather Woodbury’s Tale of 2Cities: An American Joyride on Multiple Tracks. 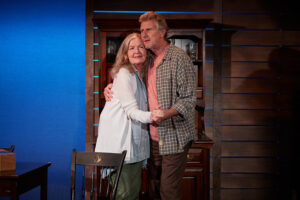 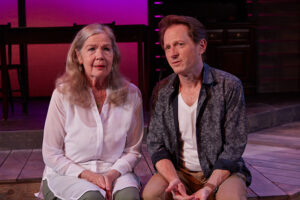 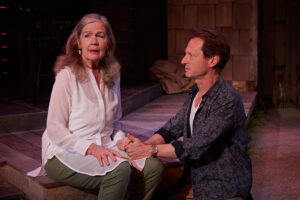 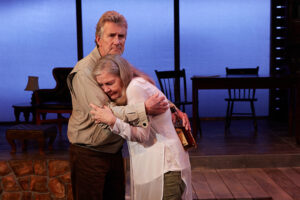 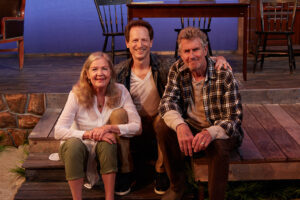 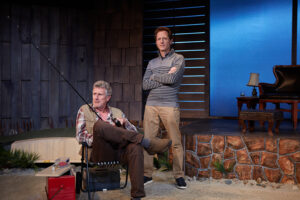 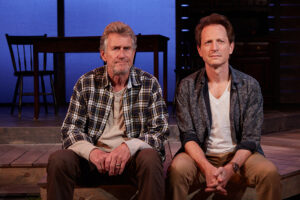 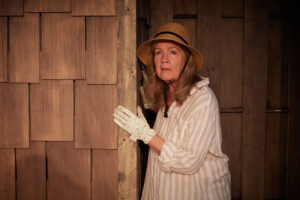 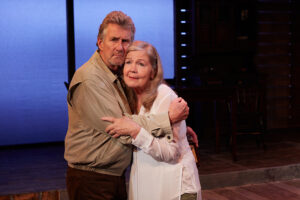 Created and Written by Gerard Alessandrini
Directed By William Selby

Solana Beach, Calif. – North Coast Repertory Theatre is celebrating unforgettable musical legends with a wildly funny send-up of The Great White Way. FORBIDDEN BROADWAY’S GREATEST HITS parodies beloved musicals including Chicago, Phantom, Wicked, Fiddler and many more with wit, charm and hysterical lyrics. This brilliant satire pays loving tribute to some of the theatre’s most cherished stars and songwriters. Endlessly entertaining, this show has endeared itself to audiences the world over. Early ticket sales have been booming, so make reservations now to avoid disappointment.

END_OF_DOCUMENT_TOKEN_TO_BE_REPLACED

FOR IMMEDIATE RELEASE
An Iliad

Solana Beach, Calif. – North Coast Rep announces the return engagement of AN ILIAD, a dynamic tour-de-force adaptation of Homer’s classic poem about the Trojan War. A war-weary poet recalls the nobility, savagery and valor of the battles and warriors, while deftly exploring the human costs of war through the centuries. Award-winning actor Richard Baird vividly brings to life the power and humor of this brilliant adaptation by Lisa Peterson and Denis O’Hare. With an evocative accompaniment by Amanda Schaar, this is an enthralling, theatrical experience that is not to be missed.

David Ellenstein directs the award-winning Richard Baird on North Coast Rep’s mainstage. The play was streamed last year as part of our steaming series and David Ellenstein felt it was an important piece of theatre and that our audience should see this live on stage.

END_OF_DOCUMENT_TOKEN_TO_BE_REPLACED

FOR IMMEDIATE RELEASE
The Homecoming

Solana Beach, Calif. – THE HOMECOMING is often regarded by critics as Nobel Laureate Harold Pinter’s most enduring play. Set in an all-male household that relies on fantasy and one-upmanship for its very existence, it is a searing masterwork of family warfare. The family’s toxic, but familiar pattern is disrupted by the arrival of a long-absent son and his new wife. Her presence ignites an explosive situation, one that is vicious, funny and unsettling. Although written more than 50 years ago, the play explores issues about power, sexuality and self-identity that are still debated today. This Tony winner for Best Play is must-see theatre for the serious playgoer. Directed by David Ellenstein. For mature audiences only.