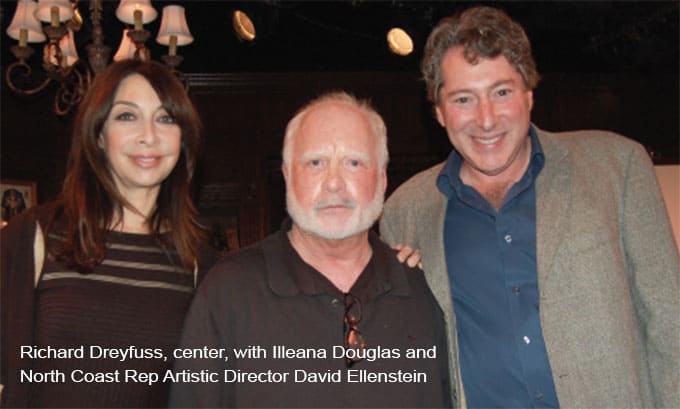 North Coast Repertory Theatre 2020 honorees Richard and Svetlana Dreyfuss want more than an audience at the theater, they want active citizenship in America

For all the talent that so many local theater companies pack on, around, and behind their stages, not one of them would take for granted the privilege of calling an Academy Award-winning actor a friend. And that’s exactly the company North Coast Repertory Theatre keeps in Richard Dreyfuss and his wife, Svetlana. The pair, Olivenhain residents and longtime supporters of North Coast Rep, will serve as honorary chairs on March 22 at its Spotlight Gala at the Fairmont Grand Del Mar.

Should anyone wonder if the couple is merely lending their name without the sentiment to back it up, wonder no more. Without hesitation, Svetlana proclaims, “It’s our favorite theater!” To which Richard adds, “It was location, location, location, and then when we went and saw a show…” Svetlana jumps in, “And it’s so cute and homey.” Then, Richard again, “And I always wanted one of those.” And Svetlana: “They do remarkable work. We absolutely adore this little theater and the quality of plays there. We would like to help in any way possible.”

This is a conversation with the Dreyfusses. The verbal volleying means sometimes they’re finishing each other’s sentences, while other times one’s sentence isn’t completed before the other jumps in to build on a sentiment. But regardless of the subject or who’s doing the talking, there’s no questioning their mutual respect and admiration. There’s also tremendous respect for North Coast Rep’s artistic director, David Ellenstein. “David’s doing incredible work and his whole family are absolutely incredible people,” says Svetlana, as Richard echoes that they’ve become good personal friends of Ellenstein.

In addition to an appreciation of the art itself, Svetlana’s enthusiasm for theater lies in its impact on society: creating events for people to meet and engage on a higher cultural level and grooming the next generation to enjoy the arts as well.

Richard’s observations on the impact of the theater are viewed through an actor’s lens. “Most people don’t realize that when you do a comedy and you make people laugh, you are doing what is known in Judaism as a mitzvah — it’s a gift,” he says. “It means that you can find that people will laugh so hard that it looks like they haven’t laughed in a hundred years, and you know you’ve lifted something painful off their shoulders. And when you do a drama, you can literally feel them [watching] on the side of your face as you walk across the stage, and the whole thing is based upon pretense. It’s the one art form that’s based entirely on pretense: the clothes you’re wearing are not yours, the words you’re saying are not yours, you deny that there’s a stagehand in your peripheral vision, and you deny that the audience is an audience. And the audience denies that they’re watching actors; they pretend that they’re watching real life, and in fact that pretense builds truth and it can be an experience of such immediate, deep feeling that only acting can cause you to burst into tears and burst into laughter. Music can’t do that, and ballet, and novels — they can all make you laugh and make you cry, but in a gradual way.”

However, he also sees theater as a means to advance awareness of issues that are very real. “When you act, you are representing mankind right there in front of you,” he explains. “The fastest way of getting an idea into culture is theater. Theater is at the root of how I intend to turn people from passive to active citizens.” He’s referring to his longtime campaign to return the teaching of civics to American classrooms, a passion the couple shares. As a course of action, The Dreyfuss Civics Initiative was founded in 2008 with a mission to educate our children on the lessons of civics to create a more engaged, active population that will embrace the responsibilities of American citizenship.

He offers a lengthy explanation including everything from government cover-ups to the quiz show scandals of the 1960s and, ultimately, the removal of the study of civics in the ’80s, for how we’ve developed a sweeping general distrust and degraded our ability to have civil discourse and even disagreement, which again points to the importance of civics. “Civics is not only the study of government, it’s the study of civility,” he emphasizes.

It’s immediately evident that his love of country and dedication to this goal is very personal and paramount in this point of his life (he has announced his retirement from film work but says if he acts again it would be “for fun”), and he chokes up as he talks. “It’s a valuable thing, America. It’s more valuable than you can possibly know. And we have to be reminded to do something and not just watch it go. They’ve turned us from being participatory citizens into passive onlookers. We don’t think that we can or should get involved. Well, babe, we better!” he urges.

Asked about the criticism celebrities sometimes receive when voicing political views, Richard responds, “Never forget that celebrities or actors or whomever are American citizens and they’re allowed a certain freedom of speech. I think that we are all responsible for the country. And if you’re a celebrity and you’re well-known, take advantage of it. If I have the luck of having a wide audience, I’m going to use it.”