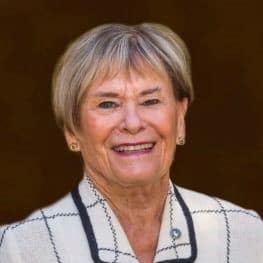 Berit is a native San Diegan.  Her undergraduate degree is from USC and her Masters in Business from San Diego State University.  After receiving her Masters she pursued a career in real estate/construction lending beginning with Union Bank in Los Angeles.  Her lending career spanned 20 years both in Los Angeles and San Diego.  She subsequently was COO for UCSD Extension and returned to her real estate background as the COO for the Tom Hom Group and Executive Director of the Charitable Real Estate Foundation for the San Diego Foundation.

Her parents instilled in Berit that the San Diego community had been good to her family’s business and that it was appropriate for her to give back to the San Diego community.  Berit has been involved in both civic and nonprofit organizations for many years.  She was on San Diego City’s Arts and Culture Commission, the City’s Downtown Planning Committee, and the Mayor’s Task Force to restart the San Diego Symphony after filing for bankruptcy.

In the nonprofit arena, Berit has been involved with numerous organizations.  Her leadership positions included Chair of the San Diego Zoo Global Board of Trustees, Chair of San Diego Hospice, and President of Charter 100.  She is currently on the American Alliance of Museums Board, Charter 100 Board, and Chair of the Zoo’s Capital Campaign.

Berit and her husband, Tom, live in Point Loma in a Frank Lloyd Wright inspired home that Tom built, including most of the furniture in the home.  Berit enjoys gardening and their home has been on two garden walks.  They both enjoy the arts and have been supporters of the San Diego Symphony, the Old Globe, San Diego Opera and North Coast Rep.