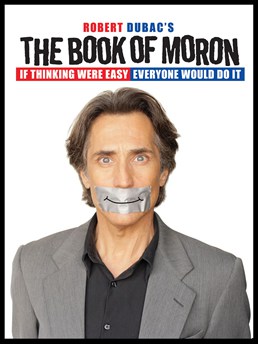 Robert Dubac’s newest Off-Broadway solo hit, THE BOOK OF MORON, has been described as one of the most “Hilarious” “Intelligent” and “Scorching” satirical attacks on idiocracy since Mark Twain. (And “idiocracy” isn’t even a word. How dumb is that?)

The New York Times raves, “Riding shotgun with intelligence and absurdity, there’s laughter for all!”

Are you are craving for some satire that cuts with a clever intelligent edge? Are you are tired of adolescent comedies generated by the mediocrity of television? Then buckle up for a hilarious joy ride over the pot-holed highways of cultural hypocrisy with Robert Dubac’s THE BOOK OF MORON!

It’s comedy on steroids. Think your funny bone can handle it?