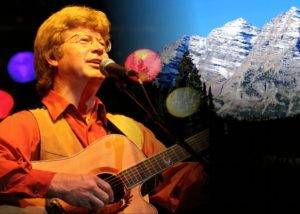 Jim Curry, returns to North Coast Repertory Theatre to perform the music of the late John Denver. The music “is like an old friend, outlasting trends and standing the test of time,” says Mr. Curry. Join acclaimed performer Jim Curry for this tribute to the music of one of the most beloved singer/songwriters ever to grace the stage.

Jim Curry, whose voice was heard in the CBS-TV movie Take Me Home: The John Denver Story, has performed Denver’s music in sold out shows throughout the country and has emerged as today’s top performer of John Denver’s vast legacy of multi-platinum hits.

He has an uncanny ability to mirror John’s voice and the clean-cut look takes you back to the time when “Rocky Mountain High” “Sunshine” “Calypso” and “Annie’s Song” topped the charts and his is popular music had the heartfelt message of caring for the earth and for each other.

Over the years, Jim has been joined onstage by former John Denver band members and behind the scenes with John’s family and friends. Curry has developed a one-of-a-kind musical and visual experience in which parents, grandparents and children alike can immerse themselves in uplifting, heartfelt music with a message. The music is performed along with projected slides and videos of nature that will truly fill up your senses.

Jim will be accompanied by his wife, Anne Curry (vocals, guitar and mandolin), Diane Ireland (flutes) and Chris Wills (vocals and keyboard).