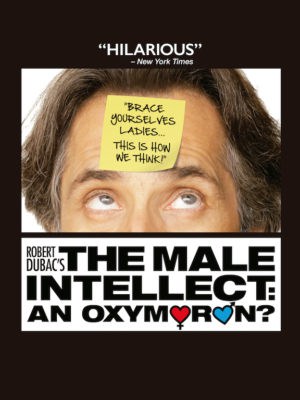 Robert Dubac’s THE MALE INTELLECT: AN OXYMORON? is an international comedic phenomenon. Described by The New York Times as “Hilarious… a one-man tour de force!” it is hands down the funniest solo show about relationships you will ever see.

Men and women from eighteen to eighty laugh non-stop as Robert Dubac embarks on a quest to answer the age old question, “What do women want?” With a shrug of his shoulders or a crook of his neck, he seamlessly transforms himself into five hysterical boneheads who offer sidesplitting advice on how to best straddle the gender gap – all while drinking a beer.

Hailed by critics and audiences alike: “THE MALE INTELLECT: AN OXYMORON? is a rare thing; a clever combination of theater and stand-up comedy that is laugh-out-loud funny, provocative and insightful all at once. There are two types of people who should rush and see it – men and women!” –The Providence Journal